Led by Public Matters, the project enables students to explore, document and interpret East L.A., learn urban planning concepts, and interact directly with professional planners and engineers on proposed plans that will impact their community. The project is also building a model pathway program with the USC Sol Price School of Public Policy.

Each academic year, the project focuses on topics that are pertinent and relevant to East L.A.:

Through Greetings from East L.A., Renaissance students connect to the school’s mission and to place. They are introduced to the University of Southern California Sol Price School of Public Policy and collaborate with a cohort of USC Price interns who are interested in civically-engaged urban planning and policy. They also create and present work with local partners, including the LA County Chief Sustainability Office (2020), Department of Public Health (2020), Department of Regional Planning (2016, 17, and 20),  Public Works (2017-19), Office of Supervisor Hilda Solis (2018-2020), Los Angeles Times High School Insider (’16-’18), and US Census Bureau (2020). In the classroom and out in the community, Renaissance students interrogate history, learn new skills, and define their own neighborhood development goals. The project’s ultimate goal is to prepare Renaissance students for attendance at USC Price. 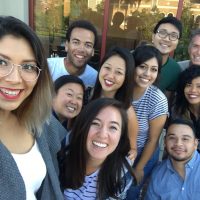 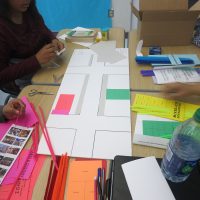 Work with collaborators to develop the project’s curriculum 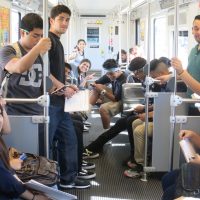 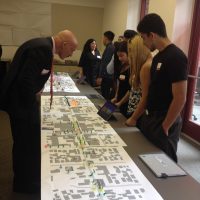 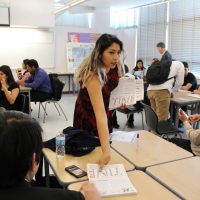 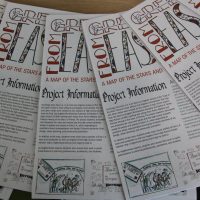 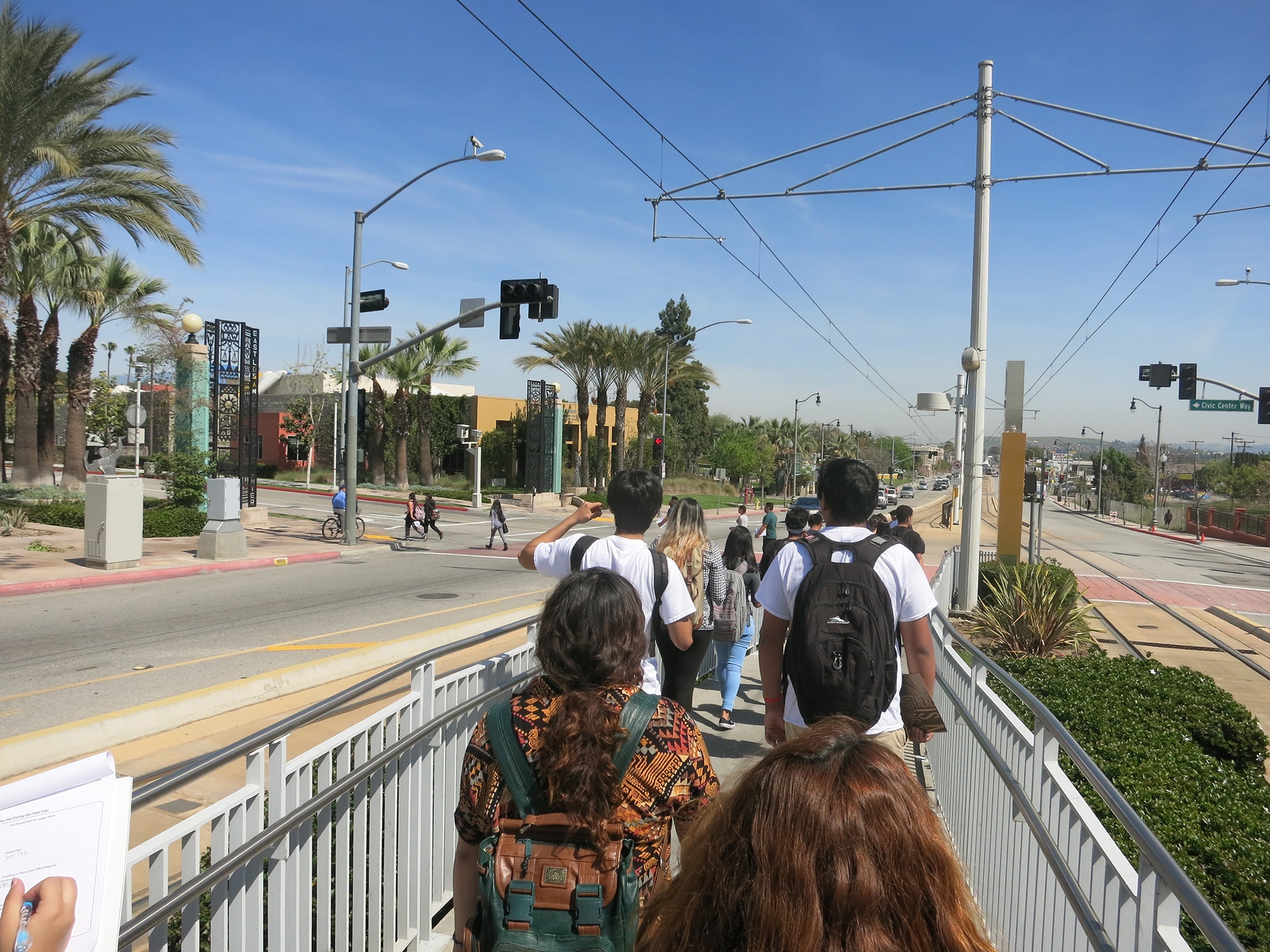 “East Los Angeles is a special community, a mix of cultures and people from all over the world finding their way to this 7.4 mile, boot-shaped piece of land hoping for a better future. East L.A. started in the mid-1870’s as a community of hardworking immigrants, where people could live affordably.

As a community we are considered to be “low-income,” at a median of $40,177 and a per capita income of $12,742. We are considered to be underpriviledged, meaning that we do not develop politically, economically, or socially at a rapid pace. We are uneducated as well. 46.7% of the population are High School graduates. 6% of the population have a Bachelor’s degree. We are also considered “violent,” with the overall crime rate in East Los Angeles being 153% igher than the national average. For every 100,000 people, there are 20.5 daily crimes that occur in East L.A.; if you live in the neighborhood, there is a 1 in 14 chance that you will be a victim of a crime. On paper, East L.A. might be a community that one would want to avoid at all costs. (www.city-data.com)

Statistics do not portray an accurate picture of East L.A. though. East Los Angeles is more than race, income, and social status. East L.A. focuses more on family virtues, work ethic, and progressivism. We have entrepreneurs in surplus. East L.A. is a community that has formed leaders, celebrities, and heroes. This map [project] highlights some of the individuals who took a chance at making a difference for themselves and for their community. These East L.A. stars are people who are well-recognized within the community. These are the men and women who put smiles on the faces of community members every single day. Some of them are hardworking immigrants who came to this country in search of a better life and also provide a better future for their family. Each person from East L.A. has a story worth telling.”

Dept of Places applies the power of participatory design and creative placemaking to strengthen neighborhoods so that all residents live in safe, healthy, and joyful places. Projects range from architectural services for installations, renovations and new construction projects, to design education and workshop facilitation, to strategic development and organizational capacity building. All services and processes are community-engaged and rooted in shared decision-making with the people directly impacted by the project. Dept of Places is founded and directed by Theresa Hwang, a community-engaged architect and educator based in Los Angeles, CA.

Renaissance is a Pilot School, an innovative model developed in a collaboration of LAUSD, UTLA, and the LA Small Schools Center. It is a result of LAUSD’s Public School Choice program, year one, and won its place at Torres in a public competition. The campus itself is the result of years of community activism, and Renaissance’s proposal was developed in collaboration with a variety of community partners. It is one of only three high schools in the United States with an Urban Planning/Design focus.

High School Insider enables students to post their stories on LATimes.com and report on issues that matter to them and their communities. Through HS Insider, students are provided the opportunity to join a network of more than 100 local schools, attend conferences and reach thousands with their reporting.

The LEAP (Learning to Excel Academically and Professionally) Undergraduate Program  supports undergraduate education at the USC Sol Price School of Public Policy. The LEAP Program is an important investment in the academic and professional success of Price undergraduate students, who go on to solve the most important social, environmental, and urban issues of our day. It empowers USC students to be true agents of change within their communities.

Greetings from East L.A. enables Renaissance students to develop interdisciplinary skills in the arts, design, urban planning and community journalism while creating an authentic East L.A. narrative that celebrates the community and its residents. It creates a process that informs and engages with East L.A. planning and economic development goals and decision makers.

In and out of the classroom, students have the opportunity to interact with, present their ideas to, and learn from municipal planners and civic leaders. Each year, students share their work in public forums, on the web through platforms like LA Times High School Insider, and through the dissemination of a public project.

GELA is built around the premise that participating students are community experts; they are the guides who should provide the public with insight into East L.A. We feel that local knowledge and expertise is instrumental to leading processes that have the potential to impact public perception, policies, and actions on East L.A.’s environment. Our aim is to create a process that informs and engages with East L.A. planning and economic development goals rather than creating a stand-alone school activity. 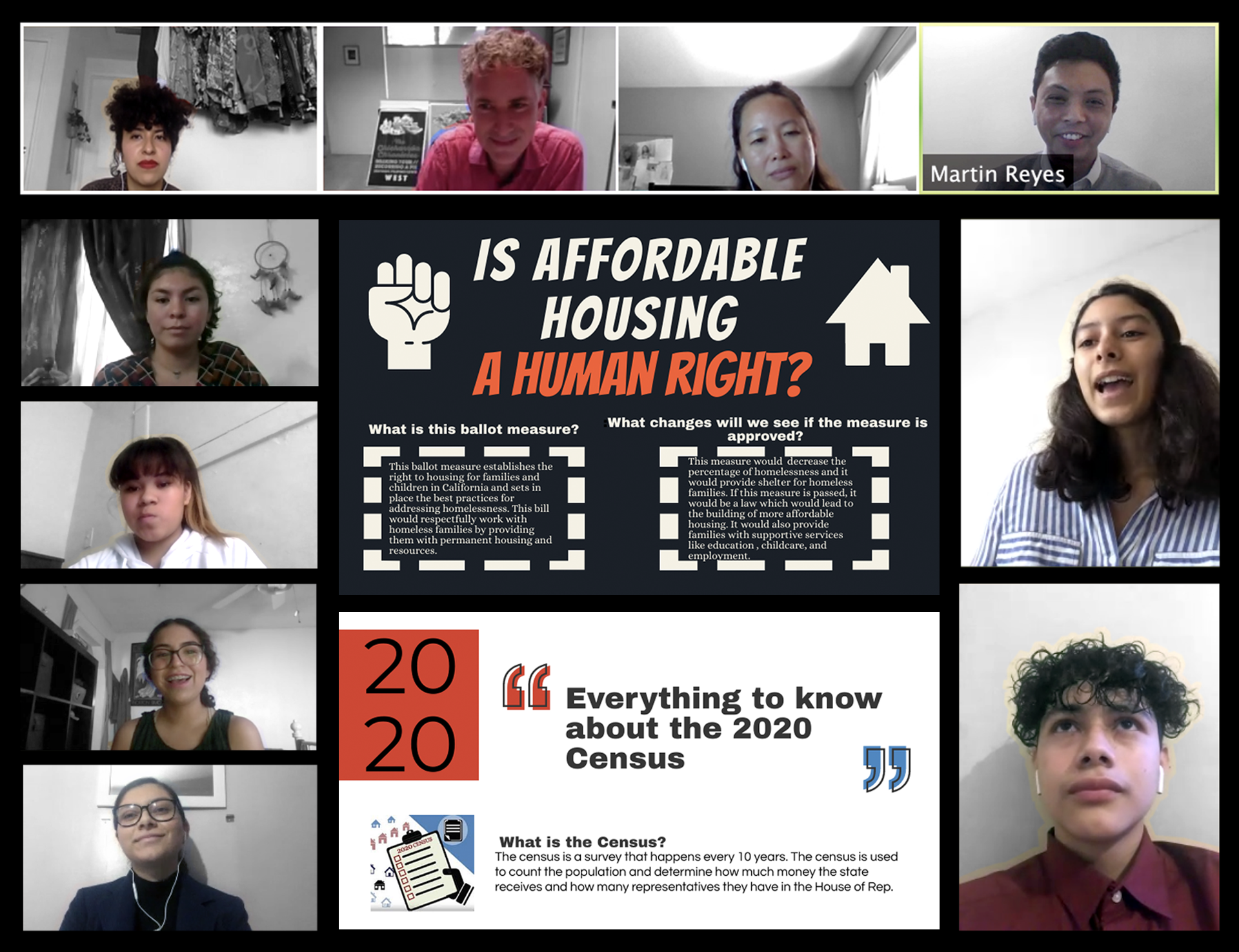 GELA introduces students to urban planning and design concepts, professionals, and applications early enough in their high school careers to prepare them for their near- and long-term futures.

We are particularly interested in creating pathways for education and employment in the fields of design and urban planning. While these are Renaissance’s focus, they are also fields that have chronic underrepresentation from people of color. The partnership with USC aims to create a pathway of diverse students into USC’s policy and urban planning programs. 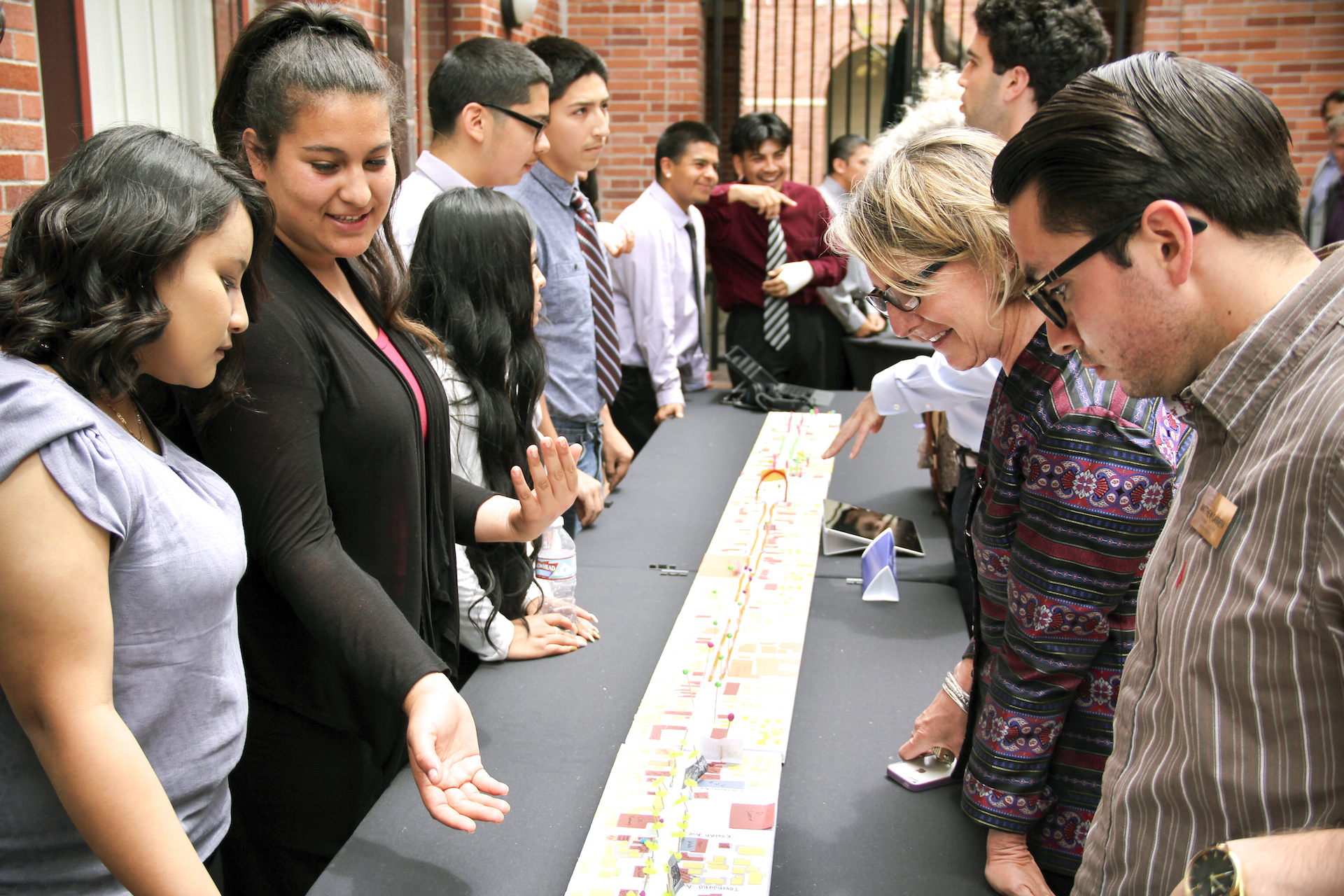 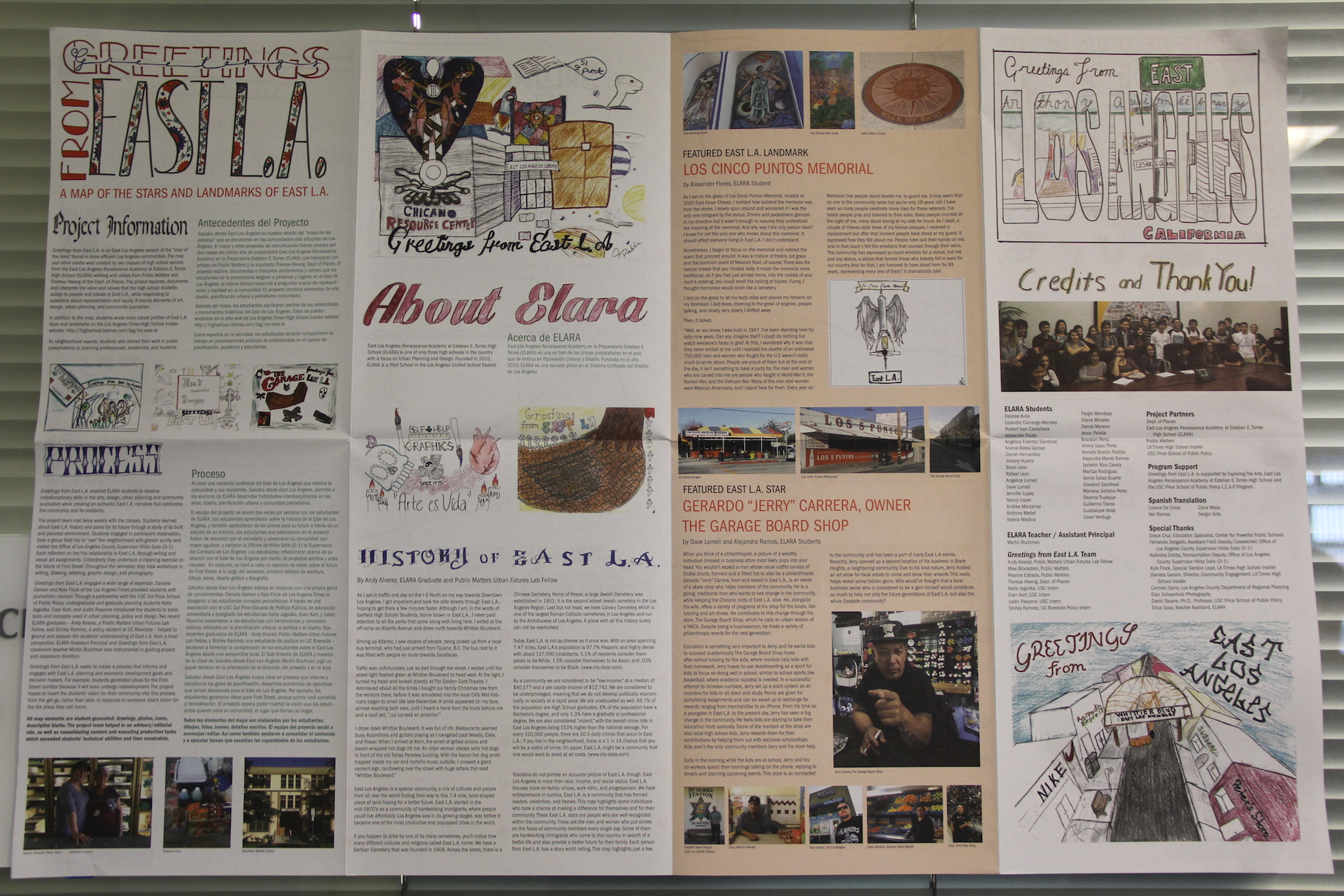 EAST L.A. MAP OF THE STARS 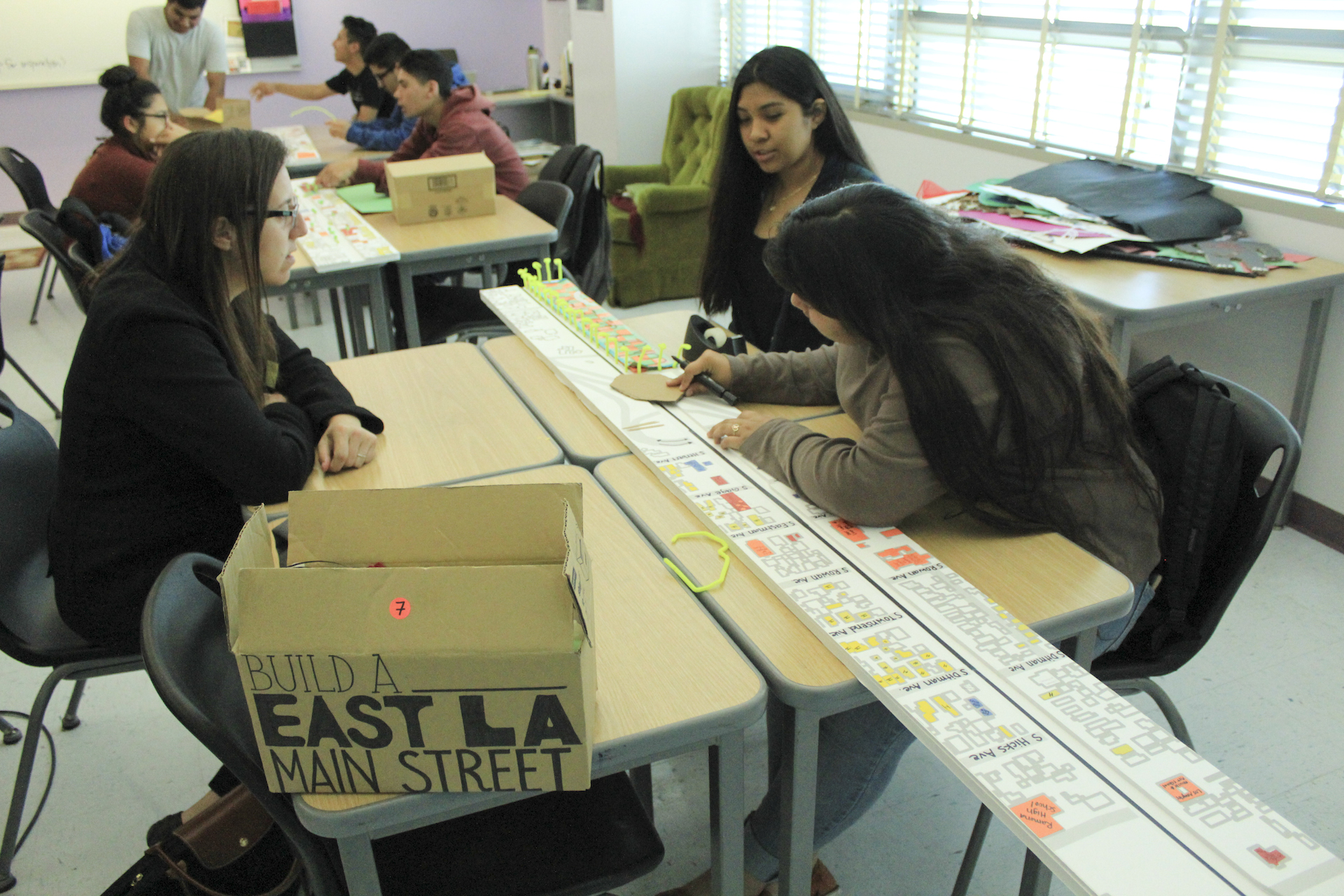 Beyond providing youth with art, design, and urban planning skills, Greetings from East L.A. builds a greater sense of community through civic participation. Students connect to the people and places they are already familiar with through intentional observation and interaction, increasing their awareness and heightening their sense of belonging and ownership.

UPDATES / OUT IN THE WORLD